Friday's announcement of the Cisco Videoscape Solution will drive growth of the interactive video market. We share Cisco’s vision and look forward to the extension of their infrastructure to support immersive video and deeper viewer engagement. The proven Coincident TV solution as deployed with broadcast networks on #1 shows will make Cisco’s vision real and tangible today.
Posted by Coincident.TV, Inc. at 10:19 AM 2 comments:

Coincident TV just launched an interactive video channel for IgoUgo, the social travel site created by Travelocity. This experience is a 10 city, 50 video interactive travel guide that allows users to engage with video hosted by YouTube on IgoUgo, while connecting to Facebook and Twitter at the same time they book travel. 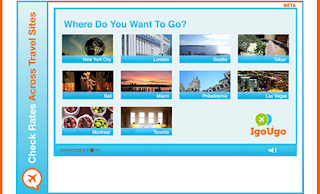 There is important in two BIG ways:

1) The application delivered to IgoUgo is a real solution. It leverages Travelocity and Youtube video in a local search context. This technique can be applied for anyone looking to use video to sell via contexualized videos. Before Coincident TV, neither IgoUgo nor Travelocity had a video solution.

2) Coincident TV provides a cohesive platform that lets Travelocity use YouTube as the Content Delivery Network, Facebook as a social viewing portal, and Twitter as the viral live promotion arm. In essence, this creates rich content from borrowed sources, enabled by Coincident TV.

Navigate to the IgoUgo application for New York and click Play Video.
Posted by Coincident.TV, Inc. at 3:33 PM No comments:

A video annotation is just like a regular annotation but with one difference – instead of displaying a still image or SWF, it displays a video stream as its content. In FSN's Hockey Prep Zone experience, Akamai, a leading content delivery network, streams live hockey games into the CTV player every Thursday night. For the rest of the week, the Akamai streams can be replayed if desired by revisiting the experience. 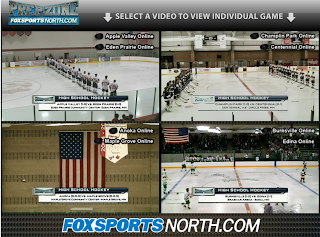 When the Hockey Prep Zone launches, all videos are initially muted. Mousing over an annotation plays the audio for the selected annotation. Click on a video annotation to watch an individual game and chat live with other video viewers. The chat room is sponsored by Arby's. Yum.

How Online Video Is Creating the Movie Hits of Tomorrow – Today

By Craig Forman, Board of Directors

Few experiences are more gripping for an audience than cinema. Throughout the past century or so of motion picture history, technology has constantly enhanced the movie-going experience, from the advent of “talkies” (when sound was introduced) to the cutting-edge, big-budget 3D releases of today.

But the marketing experience for filmed entertainment simply has not kept pace with the constant transitions and advancements of filmmaking. The audience that saw the trailer for “Casablanca” would be entirely comfortable watching the trailer for this season’s “The Town.” Marketers still employ this “one-way” promotional technique – directly from the producer to the audience – offering film highlights but not much else. Until now, studios still unroll the traditional and dated film trailer for every new cinematic release.

The CTV bet is that movie marketing and promotion will never be the same. Rather than simply providing an internet-distributed video of edited film highlights – as in an online trailer – CTV is partnering with 20th Century Fox to create an interactive experience designed to promote the film well before the ticket-buying window opens, and to carry that immersive experience well beyond the actual cinema viewing of the film.

How is it done? Basically, the idea is to use the interactive power of CTV’s programming language to create relevant links, or cue-points, for the audience that go well beyond the linear highlights of the film. These can include:

• Links to the online “social-grid” involving stars and their characters, as a way of including producers and talent and allowing the audience to interact.

• Links to the merchandising opportunities created by the film, including access to ancillary products ranging from soundtrack albums to logo-merchandise.

• E-ticketing. This one is obvious but CTV provides a direct way for interested audience members to pre-book their seats with all the various popular ticketing platforms.

• Brand extensions and franchise development. This is a major enhancement of the film marketing experience. Through the CTV online platform, film-goers can continue to engage with the characters, stars and brands that are created in the magic of the movie theater well after the lights have come back up.

Indeed, the interactive film trailers hold the prospect of becoming ongoing destinations in and of themselves, with a lifecycle that could continue until a sequel or a new franchise is underway.

To be sure, not everything is currently appearing in our apps for these two trailers. Some of the above features are still “world-of-tomorrow” enhancements that CTV’s team of creative minds and engineers are diligently working to create.

As Humphrey Bogart says in “Casablanca,” CTV believes its partnership with Hollywood marks “the beginning of a beautiful friendship.”
Posted by Coincident.TV, Inc. at 4:02 PM No comments:

The limits of the Internet are endless, so it’s really strange that, until recently, live video really wasn’t an option. Sure, there was AIM and chat rooms – if you wanted to type messages in real-time. Yes, Apple has had limited live video chat for a while now, if you can get a good Web connection. Only recently has technology evolved to enable quality live streaming video of events, concerts, sports games, etc.

With the advent of the real-time Web, audiences are finally able to connect a new dimension – video! Now, people can take advantage of the intimate communication and social activity that already make the Internet such an amazing place. For the first time, there will be a face (real and virtual) to support all that typing. We’ll watch it live – and experience it live – together, no matter where we are sitting.

For example, Fox Sports North was looking for a comprehensive platform to power live high school sporting events such as football and ice hockey. This platform is part of a larger, community-based programming effort to engage their viewer in all aspects of their sporting lives. So, using our Coincident TV immersive video editor and player, we developed the Prep Zone, an application that offers an amazingly simple and social way to watch your favorite sports teams live and in action.

Viewers access a landing page with four featured games of the week. Once they click on a preferred game, they’re instantly tapped into a live feed that lets them catch all of the real-time excitement. Meanwhile, users can view team pages and player information without ever surfing away from the game.

Within the video player, audiences can cheer and jeer or rant and rave as if they’re in the stands. Broadcast live with local crews and commentary, the high-quality game feeds run into the Coincident TV player thanks to our partners at Akamai. Fans can simply click on any of the other four games at any time and instantly switch over, carrying on with the interactivity and relevant weblinks without missing a beat.

From local athletes to families, alumni and distant fans, we’ve seen audiences engage with each other and Prep Zone content far after the final whistle blows. Debating specific plays and strategy, these passionate viewers are ready to interact with fellow fans and sports teams. We’ve only been live with Prep Zone for two weeks, and the instant feedback from the 13,000 unique viewers who have tuned in has been phenomenal. Live Web video paired with Coincident TV offers all kinds of interesting brand engagement possibilities – and we’re starting to explore some of them with this project.

For example, in Prep Zone there are four different local football streams. Each has two teams from two different cities. We’re planning to roll out customized, targeted ads depending on which team fans support with the local WalMart or McDonald’s in each hometown. Adding the live dimension offers more possibilities, such as connecting the owner of a regional franchise with the community via live chat, or offering deals and discount pricing for goods within the live Webcast. The hyper-local advertisements aren’t just coupons targeting you via search, they’re engaging retail opportunities that reach you and your community from within your community.

The Value of the Coincident TV Software Suite

Most people these days hear about the world of online video exploding. For example, Comscore measured 178 million U.S. Internet viewers in July 2010 watching an average of 14.7 hours of online video per viewer. The sheer quantity of videos viewed on the web has risen from 9.2 billion in September 2007 to near 34 billion today. And while the video explosion is undeniable, the more important focus is how content creators can monetize this recent phenomenon.

This is where Coincident TV comes in. Coincident offers software to create interactive video -- defined as the merging of online video, social media, weblinks and commercial transactions in one immersive experience. Wait, the merging of what you ask?!

Well, it's simple. You can take online streaming video, put images over the video, and link these images to all web pages and other online videos anywhere on the Internet! That means linking to video streaming from YouTube, Brightcove, Akamai, Facebook, Blip.tv, Limelight, and more, or linking to any web page that has a live URL, including social media sites such as Facebook and Twitter.

The Editor is a browser-based application designed as an assets assembler; that is, the video, images, and other assets are built using other products but they are assembled in the Editor as an interactive video experience. After video is imported into the Editor, the content creator can overlay images onto the video. These overlays can be set to navigate to other parts of imported video, link to other videos saved as CTV files, or link to other web pages.

The Player is web-based and plays in a browser. The Player plays files saved in the Editor that are known as CTV files, i.e., files with a .ctv extension. The most important feature of the Player is the Picture-in-Picture functionality that allows the viewer/user of the video to never leave the video while browsing the web. The video is always the top layer in the browser, ensuring that a video experience stays a video experience while opening up new opportunities for contextualized web-browsing and e-commerce.

The Analytics portal allows the content creator to measure the effectiveness of the interactive project -- seeing who clicks on what and when. All actions within the Player are measured on Coincident TV log servers. Analytic reports includes count information such as total and unique clicks, videos, and session data, and also in-depth information on clicks inside the video, Picture-in-Picture layout, and breakdown of CTV file navigation.

Together these three parts of the software suite offer a unique way of browsing the web through a video experience, and a new way of monetizing and increasing the value of a project's video, graphic, and web assets.

Welcome to the world of the video web, where Coincident TV offers a simplified way to create your valuable interactive video experiences!
Posted by Coincident.TV, Inc. at 3:30 PM No comments: